Necessity, Desire, and the Machinery of the Universe

The Machinery of the Universe

Most modern ceremonial magicians talk about something they call the “Spiritual Experience of Yesod,” the “Astral Light” or “Foundation,” and they call that experience the “Vision of the Machinery of the Universe.” It was seven years ago when I had mine.

May 10, 2009, I was in a head-on car crash with a 17-year old from the suburbs, and yes she was driving her daddy’s SUV. I ended up with a broken arm and my knees had collided with the dashboard. To top it off it was Mother’s Day, and I really dreaded calling my mom to tell her what happened to her son on what was supposed to be her day. 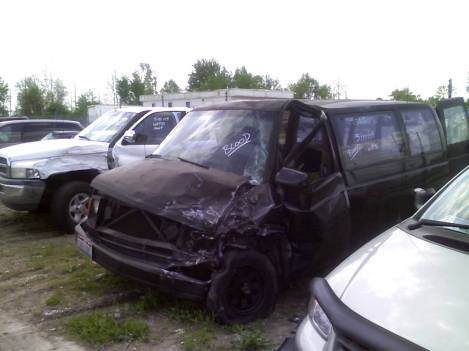 This was my van. I was in the driver’s seat.

Of course that was a long day, and it turned into a months-long process as my body began the process of healing. A settlement was needed to get through part of this, and at the time my prospects were unknown.

And then it hit me. At the part where one normally names the Mystery being prayed:

If you can read Latin, you’ll know exactly what this is. Most people would call it a “money spell.”

Magically I was out of practice. This was during the time when I tried to be a good exoteric and was then pastoring a small multi-denominational church. Yet it came back like riding a bicycle.

And then it happened. After a few weeks of praying the Rosary and focusing on my objective, it hit me.

It was like I saw the gear-wheels and sprockets of the Universe. Like I could reach out and touch them. That’s when I also came to a couple realizations.

And then, as a consequence of that epiphany:

“There is no such thing as necessity. What we call necessity is merely the contingency of desire.”

As a result, I ended up with a settlement more than four times what I was told I could expect in a best-case scenario. Yep, I was a very happy camper for a little while.

There’s No Such Thing as Necessity

Before this starts sounding like the ramblings of a madman, let me step back and explain a little bit. While radical, this idea is far from new.

Case in point: there’s an old adage among salesmen saying “If you need to make this sale to pay the rent, you may as well start packing right now.” Even Crowley, as much as I can’t stand him, hits a very similar nail on the head when warning against “lust for result.”

Let’s take a look at ourselves. If we want to live, we need to breathe. But we don’t need to breathe is we don’t have any desire to live. Again, that necessity (breathing) is the contingency of the desire (living).

Now this isn’t a beginner-level teaching, and some people will object “But we need to live.” To which I answer, “No. The world will go on with or without us. And if the soul truly is immortal, then the last thing we need is continued physical existence.”

In fact, if samsara or reincarnation is true, then it doesn’t matter because we’ll just keep coming back anyway. Whatever lessons we were supposed to learn now can be learned later on.

So whence comes this perceived need to go on living? It’s not a need but a very strong desire embedded deep within our subconscious, deep within the subconscious of practically all living creatures. This desire is so strong, so overwhelming, that we merely confuse it for necessity.

Ditto with such things as money, sex, and so forth. Having grown up poor, I tended to think of everything in terms of need. In fact a poor person’s life can be considered as dictated by a sense of needing to make it to the next meal or the next month’s utilities. As such I couldn’t internalize the instructions in most magical books about “lust for result” or “indifference to desire,” because the feeling of need was so in-my-face as to be insurmountable.

How Do We Apply This?

I was in a stable financial situation when I had the accident, and daily meditation/magical work on the situation helped me get to where I could make that distinction between necessity and desire. Once the distinction sank in, that’s when everything started happening with breakneck speed and came to a resolution within a few weeks after my arm was healed.

What I learned from this is that if you want your magic to work to its fullest potential, you need to separate the difference between necessity and desire not just in your mind but in the depth of your subconscious. Once internalized, it enables you to take control of the panic reflex when things go south, keep a cool head, and keep from sending contradictory emotional messages into the universe that can foul up manifestation.

As for me, I sometimes slip and fall back on old mentalities. I’ve learned that when I lay hold of this truth of want and leverage it magically and mundanely, I can get spectacular results. Yet when I forget it and fall back on an old paradigm of need, that’s when the downward spiral starts to happen.

Where Do We Go From Here?

Siddhartha Gautama once said, “The cause of suffering is desire.”

Commentators commonly say he meant suffering (Dukkha in the original Pali) as a state of dis-ease, and having grown up without means I’ve no doubt that “desire” (Tanha in the original Pali, literally meaning “craving” or “thirst”) can be interpreted as perceived necessity as well as outright greed. The more we feel we need something we don’t have, or even badly want something we don’t have, the more we allow it to control us. Yet when we realize we neither need nor badly want something, we can turn the tables and take control of it.

When you pursue mundane ends or conduct magical operations, do so not as a peasant begging for a handout from some rich dude’s table. Do it instead with the mind of a tiger stalking its prey, or a conqueror claiming what’s rightfully yours. Do it with strong desire and a knowing there’s no such thing as “necessity,” but underneath that desire let there be a sort of practiced indifference, as though it’s no big deal if you don’t get what you’re working for.

Train yourself mentally to see that you seek this objective not because of desperate need, greed, or envy, but because YOU AUTHENTICALLY WANT IT. This can be a very difficult process for inner (re-)conditioning, but I speak firsthand when I say the results are more than worth it.

Originally from Queens, N.Y., and having grown up in Dayton, OH, Agostino Taumaturgo is a unique figure. He is the product of the unlikely combination of coming from a Traditional Roman Catholic background and a spirituality-friendly home. It was in this home that Agostino first learned the basics of meditation, prayer, and spiritual working. In time Agostino completed his theology studies and was ordained to the priesthood and was later consecrated a bishop. He has since left the Traditional movement and brings this knowledge to the “outside world” through his teaching and writing, discussing spiritual issues and practical matters through the lens of traditional Christian theology.
View all posts by Agostino →
This entry was posted in Uncategorized and tagged coaching, magic, magick, mentality, occult, psychology, theurgy, training. Bookmark the permalink.

1 Response to Necessity, Desire, and the Machinery of the Universe