The Catholic Blessing for Weapons of War 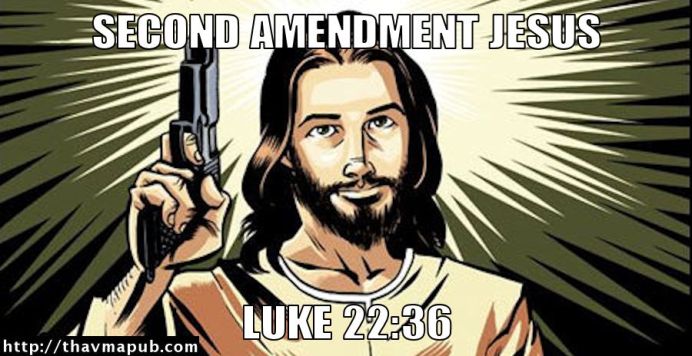 Most times, I believe war can and should be avoided. Yet there are times when an aggressor will not listen to reason, will not sit down at the negotiating table, and will leave no recourse of action other than fighting back. Catholic theology, as expressed by St. Augustine and St. Thomas Aquinas, calls this the “Just War Doctrine;” Eastern Orthodox and most Protestants subscribe to similar formulations.

Most living today would agree the last time such a course of action was necessary was World War II, and the debate rages on about whether Daesh/ISIS/ISIL/whatever they call themselves this week may also be a “war is necessary” type of situation. I’ll keep my opinion to myself for the time being.

While the Church condemns needless war, she never ceases to pray for the soldiers sent to fight and prays their fight will be in the pursuit of justice and defense of the defenseless. It’s for this reason that a blessing for weapons exists, the Benedictio Armorum.

This blessing comes from the Roman Pontifical, translated by Bishop Jason Spadafore (who also translated The Vatican II Rite of Exorcism). The original Latin can be found at the Liturgia Latina website.

The bishop, about to bless the weapons some ministers hold before him (or placed atop the altar or another table), stands without wearing his miter and says:

V. Our help is in the name of the Lord.
R. Who made heaven and earth.
V. The Lord be with you.
R. And with your Spirit.

Let us Pray.
May the blessing of almighty God, +Father, +Son, and Holy +Ghost, descend upon these weapons and upon whomever wears them, for those who wear them in the defense of justice: You, O God, who live and reign forever and ever. R. Amen.

Another Prayer.
Let us pray.
Almighty God, in whose hand full victory rests and who also gave David miraculous strength to battle the rebellious Goliath: humbly we pray your mercy to +bless these weapons by your life-giving mercy; and grant your servant (name) who wills to bear them, that he (she) may use them freely and victoriously for strengthening and defending the widows, the orphans, and Holy Mother Church against the attacks of all enemies visible and invisible. Through Christ our Lord. R. Amen.

Then he sprinkles them with holy water.

Traditionally this blessing was a performed by a bishop who may delegate it to a priest. Under Paul VI most so-called “reserved blessings” lost their reservation and may now be given by any priest (Sacrocanctum Concilium, n. 79; clarified in Inter Oecumenici, n. 78). The status of this blessing may be doubtful since it was found in the Pontifical and not the Ritual, though the general modern practice is to treat all blessings as non-reserved unless they involve the consecration of altars, church buildings, or other such things intended for use in the Church’s worship life.

The text itself may be ancient, or at least part of it. I say this because the Main Blessing Prayer has many commonalities with the Eastern Orthodox blessing for weapons – reference to David and Goliath, defense of the widows and the orphans, etc. – that I suspect the two prayers evolved from a common ancestor dating from before the East/West Schism. Perhaps any professional liturgiologists reading this would care to elucidate in the comments.

As I write this, it’s Memorial Day Weekend, and I so I leave you now as we enjoy the cookouts, the family time, and of course the day off from work. Just remember, as you bite into that perfect burger or juicy hot dog, remember those who gave their all so you didn’t have to.

Originally from Queens, N.Y., and having grown up in Dayton, OH, Agostino Taumaturgo is a unique figure. He is the product of the unlikely combination of coming from a Traditional Roman Catholic background and a spirituality-friendly home. It was in this home that Agostino first learned the basics of meditation, prayer, and spiritual working. In time Agostino completed his theology studies and was ordained to the priesthood and was later consecrated a bishop. He has since left the Traditional movement and brings this knowledge to the “outside world” through his teaching and writing, discussing spiritual issues and practical matters through the lens of traditional Christian theology.
View all posts by Agostino →
This entry was posted in Rituals and Spells, Theology and tagged 2a, 2nd amendment, blessing, guns, jesus, just war doctrine, Molon Labe, religion, second amendment, spirituality, swords, war, weapons. Bookmark the permalink.

3 Responses to The Catholic Blessing for Weapons of War