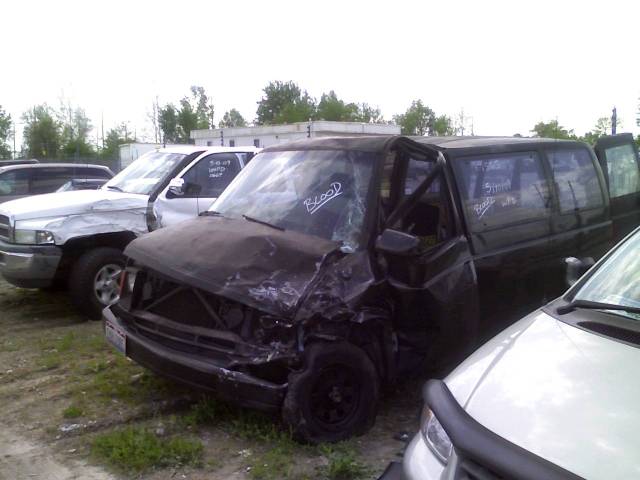 Today is the 10-year anniversary of one of my two greatest magical works ever. A work that took its origin in blood, pain, and fear, and ultimately manifested one of the basis-points for my current life.

Yep, I’m talking about the head-on car accident that happened on Mother’s Day of 2009, when some 17-year old out of Bexley smashed right into me with her daddy’s SUV.

My poor, ancient Chevy took that pounding, and by all rights I should be a dead man. Yet by some miracle, the back of my seat broke and sent me flying to the back of the van, out of St. Azrael’s grasp.

What I had instead was a broken left arm, road rash from the dashboard being thrust into my knees, and a brain that doesn’t work as well as it used to. There was also a lot of fear, though Wraith – one of the elders in the local Pagan community and a longtime friend – coming to the hospital and saying “God has blessed you, with a car accident!” helped lighten the mood a little.

(NOTE: He said this in a “preacher” voice. If you know him, you’ll understand why I ended up cracking a small smile.)

Of course, Wraith also gave me a new appreciation for my situation, and the fear gave way to nervousness, and over the next few days the nervousness gave way to “I’m scared as hell, but damnit I can do this!”

And so I did. I pulled out my Rosary and worked it with all the might described my post about Necessity, Desire, and the Machinery of the Universe. Everything I learned from that three-month long ritual – the truth behind necessity, the steps of transcending necessity and coming from a place of pure desire, and reaching out to touch the gear-wheels of the Universe to move them just so – I stand by all those things, and today gives me pause to meditate both on those lessons and all I’ve learned since then.

Ultimately, it all boils down to one thing: the next time you’re thinking “I’m fucked” in whatever capacity – personal, romantic, financial, or whatever – it only means you’re fucked in that you can’t do what you want to do at that very moment. It likewise means you might just need to bow out of that situation (especially if it’s one you allowed to get so bad via poor decision-making, or a surprise situation you didn’t have the skill set to handle), and work on your skill set and figure out how either to change your situation or insert yourself into a new one.

Case in point would be something I don’t tell anybody about: I was homeless for a brief period in 2006. I’d made some bad decisions, didn’t get off my ass to fix the financial problems I was having, then my life started falling apart and by September the landlord posted a 3-day “Vacate the Premises” notice on my door. I tried a magical solution, but everything was too little and too late. I should’ve started working on it months prior, but now there was nothing left but to pack my things.

As bad as that situation was, however, the magic I did still found me a new home; I moved in at the beginning of October, worked odd jobs until I found solid employment the following May, and was able to build my life up from there because of manifesting a new situation rather than obsessing on or trying to fix the old.

The lesson here is that the gear-wheels of the universe may be turned, but there are limitations to what we can do with them at a given moment, limitations determined by time, circumstance, and our own skills and decision-making abilities.

I realize people don’t like to hear the term “limiting belief” or any talk of there being limits whatsoever, but the fact is limitations exist and we have to accept that they exist. John Michael Greer does an excellent job of discussing both the good and bad aspects of limitation, so I’ll refer you to his blog post and move on with this one.

Our job is first to figure out these limitations and then work to transcend them physically, emotionally, mentally, and spiritually. I am a First-Worlder, so are most of my readers. Living in the First World means we have the ability to improvise, adapt, and later overcome obstacles in our lives or to escape those obstacles and enter a different life entirely. That’s what I ended up doing when leaving my old apartment behind and entering a different life which had its growing pains, but ended up putting me on a better trajectory than the old one ever did.

The same can be said for when I left the Traditional Movement. If you’ve not been involved with the movement, it’s hard to explain the emotional tentacles it wraps around you, and I felt I was walking away from “The Truth” and was damning my soul to hell at the time. It scared the hell out of me, but the fact is that I just couldn’t stay there anymore. The hyper-rigorism, the clergy at each other’s throats, the laity practically jerking off at the idea of catching another group’s priest as being somehow “unworthy” of his calling, the ideological meat-grinder of “us versus them” with all of “them” being “evil,” and the overall narrow-minded people I dealt with on a day by day basis. But I did, eventually find the courage to leave the movement, and founding Columbus Chapel of Faith Ministries was probably one of the best decisions I made ministerially (in fact a lot of the worship materials I created for that church live on in the form of We Pray the Rosary and My New Everyday Prayer Book).

Again for the move from Columbus to Dayton. Moving back to Dayton was a scary decision, because the town’s economy fell right out from under it when GM shut down its local factories and filed for bankruptcy. But on a business level, moving to Dayton put me in touch with old contacts and rescued THAVMA right out of the jaws of being shut down (the first time). Moving to Dayton, i.e. changing the situation and thus my Sphere of Availability, and staying the course were the best things I could’ve done.

[NOTE: At that point I was thinking of closing down THAVMA and starting a YouTube channel called “The Renegade Priest,” even had a theme song and everything for it. Looking back, I’m really glad that didn’t happen!]

Not all changes are good, however (e.g. the ten months I lived in Michigan because of “internet romance” – NEVER AGAIN!!!!). But all changes bring us something we can learn, even if the lesson is resoundingly negative.

So this is what we learn from the fact that necessity is a fiction at worst, and at best the contingency of our desires. It means we don’t have to hold on to circumstances and situations that hold us back or we just don’t want to deal with anymore. In fact, the “necessity” only exists because we desire to retain something in our current status quo (relationship, family, income level, and so on).

I cannot judge your situation, and only you can do that and decide what changes are worth it and what aren’t. It may be as simple as starting a regular practice of ten or twenty pushups a day to make yourself stronger, or it may be as drastic as packing up the entire family and moving across the country. I do not want to be the one to advise you on that, because again only you can truly know what’s right or wrong for you. But if you’re not happy with your life and are holding onto a status quo, the best move might be looking at it from a different angle and figuring out what you can shake up for the better.

Oh, you noticed I said this was only one of my two greatest magical works, did you? Well the second-greatest work involved getting Mr. Bergoglio elected to the Big Chair (and not because I wanted him as Pope, either). Yes there was an ulterior motive, and you better believe I prayed hard to make that happen. But that is a story for another time!

Originally from Queens, N.Y., and having grown up in Dayton, OH, Agostino Taumaturgo is a unique figure. He is the product of the unlikely combination of coming from a Traditional Roman Catholic background and a spirituality-friendly home. It was in this home that Agostino first learned the basics of meditation, prayer, and spiritual working. In time Agostino completed his theology studies and was ordained to the priesthood and was later consecrated a bishop. He has since left the Traditional movement and brings this knowledge to the “outside world” through his teaching and writing, discussing spiritual issues and practical matters through the lens of traditional Christian theology.
View all posts by Agostino →
This entry was posted in Magical Theory, Self Improvement, Theology and tagged car accident, death, desire, limitation, Magical Theory, necessity. Bookmark the permalink.