90s Occult Commercials: The Holy Angel Oracle and the Scriptures of Angel Magic 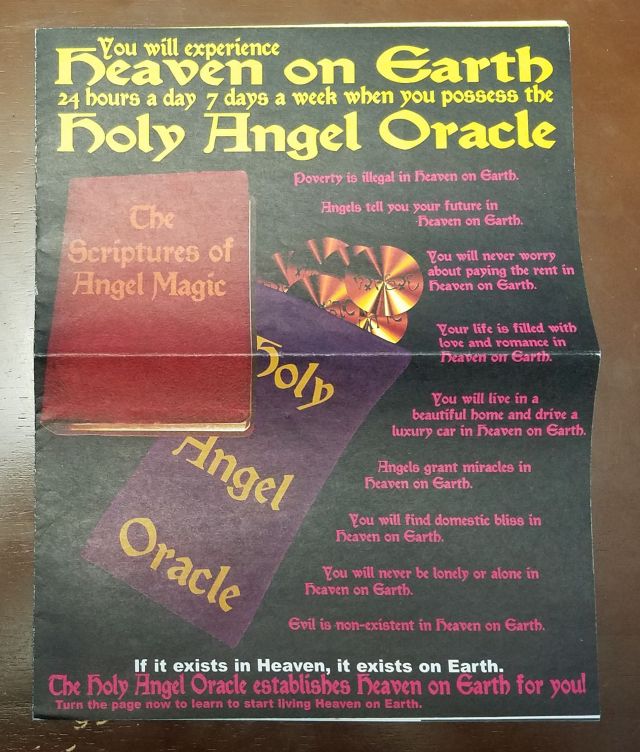 Awhile back on Facebook when I posted about Charismatics using an “Angel Board,” I also mentioned an ad about an “Enochian Angel Oracle” I received in the 90s. It’s actually a mass-mailer I received in mid-1998, and here are photos of the whole thing! 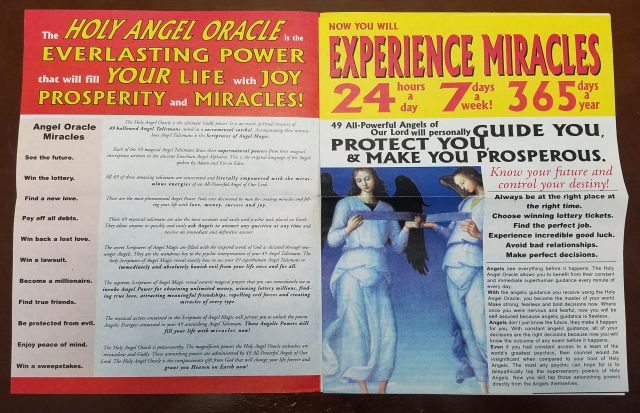 Effectively it claims to be a system for both divination and Angel Magic, offering the kinds of promises one finds with Prosperity preachers. To my mind, it’s a combination of the “spellcasting” ads we’d see in the Weekly World News back in the 80s, mixed with the fascination with angels that we saw in both the 80s and 90s, especially among Christians and New Agers. (You all remember shows like “Highway to Heaven” and “Touched by an Angel,” right?) 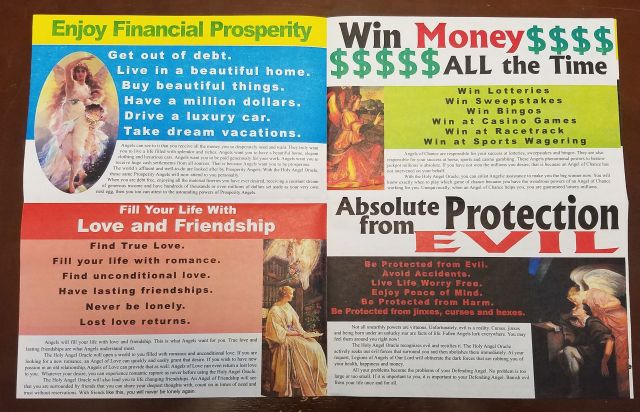 The ad also went out of it’s way to claim the Angel Oracle was “Designed by God,” a claim clearly intended to stave off the naysayers who might say this system “came from the devil.” Likewise the ad repeated claims of “Heaven on Earth,” likely hoping to appeal to the qualities of greed, selfishness, or desperation in whomever happened to view the ad.

Say what you want about the product, there’s no question the people behind it knew who they were marketing to! 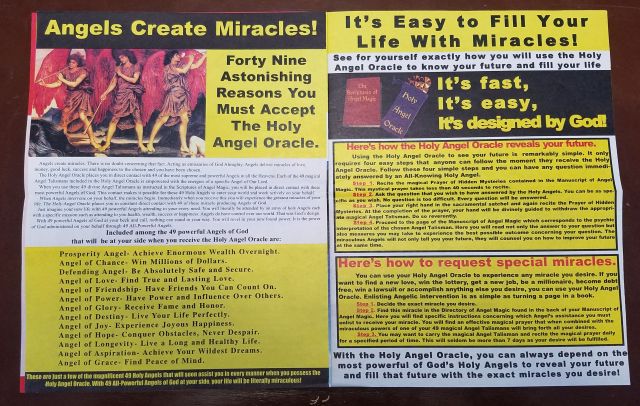 It also claims the Enochian Language was the “original language of the Angels spoken by Adam and Eve in Eden.”

I’ve always kept the ad because its premise is so over-the-top, and use it to bookmark my copy of Regardie’s Golden Dawn, that’s why this copy’s still in such good condition. I hope you find this as entertaining as I do!

POSTSCRIPT: I managed to find a copy on eBay not long ago, already sold but the images were still up. Do you want to see the full table of contents to The Scriptures of Angel Magic?

Here it is! If I ever get my hands on a copy of the real thing, I’ll make a point to post a full review on this blog!

Originally from Queens, N.Y., and having grown up in Dayton, OH, Agostino Taumaturgo is a unique figure. He is the product of the unlikely combination of coming from a Traditional Roman Catholic background and a spirituality-friendly home. It was in this home that Agostino first learned the basics of meditation, prayer, and spiritual working. In time Agostino completed his theology studies and was ordained to the priesthood and was later consecrated a bishop. He has since left the Traditional movement and brings this knowledge to the “outside world” through his teaching and writing, discussing spiritual issues and practical matters through the lens of traditional Christian theology.
View all posts by Agostino →
This entry was posted in Angels, Saints, and Entities, books, Rituals and Spells, Uncategorized. Bookmark the permalink.