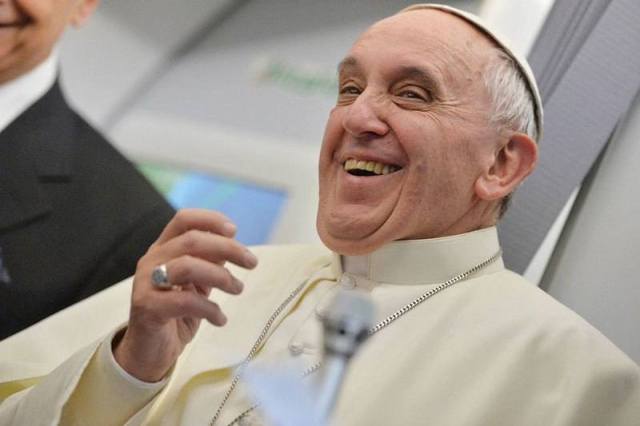 Bergoglio says he wants to change some wording in the Our Father. Which means people have been asking me about it, hence this rant-cum-blog-post.

The words under the microscope are “et ne nos indúcas in tentatiónem,” which translate as “and lead us not into temptation.”

His stated reasoning is that the wording as currently-used is misleading, that it implies God leads people into temptation. To me this looks like he’s strawmanning and stooping to the lowest common denominator.

First, the strawman: these words have been discussed over the past two thousand years and explained fully in every catechism. No serious theologian has ever taken these words to mean God leads people into temptation. In fact even Calvin, who believed God mindf*cked Adam into eating the fruit just to get his Divine Jollies, didn’t use this as any kind of “proof text,” showing the meaning of these words is already well-established as not indicating God leads people into temptation.

“Nor ought it to seem absurd when I say, that God not only foresaw the fall of the first man, and in him the ruin of his posterity; but also at his own pleasure arranged it.” – John Calvin, Institutes, 3.23.7

As for stooping to the lowest common denominator, the assumption that “the words could imply God leads people into temptation” tacitly implies that the average Christian is too stupid to understand the Christian concept of God. I’m going to reject this categorically, because in all my reading and talking to people, I’ve never encountered this implication anywhere outside New Age or fluff-bunny circles; these circles already have their own alternate versions anyway.

There’s also the issue of the original Biblical text (Matthew 6:13), in which the Greek says “καὶ μὴ εἰσενέγκῃς ἡμᾶς εἰς πειρασμόν,” which literally translates “and do not lead us into temptation.” This means Bergoglio either has to change the original text of the actual Bible itself, or change the translation to say something other than what the exact words of the text are saying.

This gets us into the debate over the “formal” versus “dynamic” translation approaches, where I side strongly on the side of formal equivalence. Reason being that while dynamic tweaks (done infrequently) can be a good thing, full-on dynamic equivalence can only result in a translator effectively disregarding what the text is actually saying and insert what they think the text should be saying. That’s why I dislike that approach, because I believe the people have a right to know what the text is actually saying, no matter how strange, offensive, gross, or confusing that text may happen to be.

Again, sometimes one or two dynamic tweaks may be a good thing. For example, the English version of the Guardian Angel Prayer is dynamic in nature and perhaps the only time an English translation actually sounds prettier than the original Latin. In fact the “trespassers” version of the Our Father is dynamic but does a better job of bringing out the intended meaning much more than the more literal “debtors.”

Now, a dynamic approach has been used before on this text, where the 1970 ICET and 1988 ELLC versions give “Save us from the time of trial.” These versions were adapted as options in the worship books used by liberal and liberal-leaning Protestant denominations, with perhaps ELCA and ECUSA being the most prominent examples. Yet, none of these churches impose only one version on all its members.

I’m going to conclude this rant by tying a few threads together. In the first place, I accuse Bergoglio’s stated reasoning of a strawman fallacy because he’s citing a potential pitfall that so non-existent even the TULIP people didn’t exploit it. Secondly I accuse Bergoglio of assuming the average Catholic is too stupid to understand the rudiments of his faith. And thirdly I accuse Bergoglio of seeking to depart from what the Biblical text itself is saying, just as the ICEL translators of old departed from the Missal and instead gave us their opinions of what the Missal was saying.

This may be one of the few cases where I think the solution adopted by liberal Protestants is the better one: prepare a version of the Our Father according to what he would like and then present it as an option to be used by individuals, prayer groups, and congregations. This is no different from what John Paul II did when instituting the “Luminous Mysteries,” or what Ratzinger did when promulgating Summorum Pontificum.

In fact, I see nothing wrong with allowing the 1985 Sacramentary and the 1964-67 Transitional Missals as optional uses, too. Complete unity of cult is already a thing of the past, and Summorum Pontificum showed Rome as willing to allow this by moving, even if only slightly, toward accepting Article VII of the Augsburg Confession: “Nor is it necessary that human traditions, that is, rites or ceremonies, instituted by men, should be everywhere alike.”

There is no problem with diversity of practice so long as there is unity of faith, and a big problem is when we worry too much about externals, about whether others “say the black and do the red” closely enough for our satisfaction. Better to focus on what should be the defining feature of each baptized Catholic, i.e. a unity of belief emphasizing the contents of the Deposit of Faith, and ultimately the rest will fall in line.

Originally from Queens, N.Y., and having grown up in Dayton, OH, Agostino Taumaturgo is a unique figure. He is the product of the unlikely combination of coming from a Traditional Roman Catholic background and a spirituality-friendly home. It was in this home that Agostino first learned the basics of meditation, prayer, and spiritual working. In time Agostino completed his theology studies and was ordained to the priesthood and was later consecrated a bishop. He has since left the Traditional movement and brings this knowledge to the “outside world” through his teaching and writing, discussing spiritual issues and practical matters through the lens of traditional Christian theology.
View all posts by Agostino →
This entry was posted in Theology and tagged bergoglio, catholic church, lord's prayer, our father, pope francis, prayer. Bookmark the permalink.