The New Rite of Exorcism: My Full Story

I finally understand my “crime.” This is my complete story.

The past few days have been abuzz about the Official English translation for the New Rite of Exorcism, and understandably so. The new ritual was published in 1999, in spite of an Italian translation being published as early as 2001, no English version had been forthcoming for a very long time.

In fact, at least one website claims this is the “first translation ever.” As readers of THAVMA will know, that’s totally false; I beat them to the punch by about 12 years. I published a rough draft of the book’s Rite of Major Exorcism on the internet in 2005, later translating the rest of the book in 2016 and titling it The Vatican II Rite of Exorcism.

Anyways, back to the story.

I remember when I first encountered the newer rite. I was on the second floor of the library at the Pontifical College Josephinum in Columbus and came across the book. Looking through it, my only thought was: “They actually expect this shit to work?” Compared to the old rite, this ritual had an overall whiny tone to it, seemed to stop every other rubric to turn and catechize the bystanders, and seems to take pains not to address the “demon” directly in any way, shape or form.

Yes, there are optional “imperative forms” that address the entity, but again that’s solely an option; it is possible to perform the complete “saying the black and doing the red,” while not once addressing the entity in question. Even worse the rite makes no attempt to bind the entity while the older rite does so completely. If you’re a reader of THAVMA, chances are you already understand the importance of binding a hostile spirit as the first order of business after setting your own protections and invoking Almighty God for the strength to do so.

If I had to sum up the new rite in one word, I’d call it garbage; the internet soon confirmed I wasn’t alone in that opinion. I’ve pointed out before that Rome’s chief exorcist once publicly said the new rite does not work and was written whole-cloth by people with zero experience in exorcism. I’ve also previously cited Dr. Van Slyke’s meticulously-researched paper showing that not only did the rite’s creators lack experience in exorcism, they also sought to impose their own pet theological theories onto the ritual.

If you’re a reader of THAVMA, you already know exorcism and conjuration are the one place with no room for prizing pet theories over real-life experience.

So, why was I looking for this book in the first place? Hollywood.

At the time, I was consulting on the production of a B-movie and we were looking at the idea of being the first film to incorporate the new ritual into the script. So I made my 2005 translation for the director and executive producer, who decided not to use it owing to potential legal complications. Afterwards, I was free to post the translation on the internet on the now-defunct “Traditional Catholic Resource Center” website I ran at the time.

That’s where the story rests for a few years. With the exception of a Supernatural fanfic writer asking me about the translation circa 2006, there’s nothing to report until 2008, when an American priest living in Rome E-mailed me about it:

He claimed this was for a book he was writing and would give me credit and a copy once published, but never heard from him again. I did find out he got in trouble for sexual misconduct not too long afterward, so I’m guessing the book may never have come to fruition. What the hell is it with priests and perversity?

Enter 2016, the year I committed my “crime.” I get the bright idea to complete the translation and self-publish it. All well and good. I didn’t sell a whole lot, and I only made 35¢ per copy anyway, which is cool because I didn’t do this out of concern for the money. But a year later I get a DMCA notice from none other than USCCB and the Vatican’s publishing house, Libreria Editrice Vaticana:

Again, not doxxing. I also ask that you not seek anybody out or harrass them.

I sent an E-mail to the contact address, and received the explanation that: 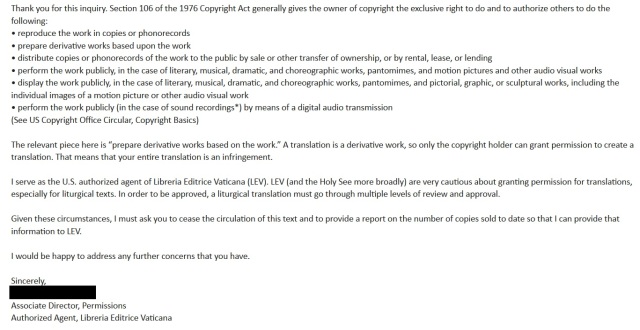 I checked this out, and it holds up that translations are subject to whomever has copyright over the original text. I can actually agree with that considering I wouldn’t be happy if someone translated one of my books into another language without my knowledge or approval either.

The exchange ended with a cloud hanging over my head, which is why I won’t re-release the book or pursue this any further since they can afford much better lawyers than I can:

Which brings us to today. So, have you figured out what my “crime” is?

You probably haven’t so I’ll spell it out for you.

Go back to those links at the beginning of the post. The articles talking about the new “official” translation being released. Several people sent me those articles asking if that’s why the Vatican hassled me.

Well, the timing makes sense. They were getting ready to publish their own translation and probably wanted to make sure the path was clear of any potential competition. That’s actually understandable, but now look at something else those articles say.

Yep, that’s right. Those articles say that even though the translation is being published, the only people allowed to read it are their own bishops and clergy that the bishop deems “worthy.”

So that’s it, boys and girls. My “crime” was not that I translated it; they didn’t take an issue about that for over 12 years. MY “CRIME” WAS THAT I MADE IT ACCESSIBLE FOR REGULAR AVERAGE EVERYDAY PEOPLE.

All this pearl-clutching about a non-working ritual that even their own top exorcist effectively called a steaming pile of garbage. But then again, if you’re either a Traditional Roman Catholic or a regular THAVMA reader, you already know the post-Vatican II hierarchy cares mostly about control.

Some may think it’s a matter of protecting people from putting themselves in danger, and I’ve already said that might be part of it and quite an understandable one. But considering that some exorcisms were actually recommended to the laity for more than 1,900 years of the Church’s history, I remain unconvinced of any other explanation for this level of restricted access.

EXHIBIT A: From a booklet published in Ireland in 1948. The permission for laity to exorcise is outlined here exactly as I described it in The Magic of Catholicism.

Whatever happens, I have no desire to be a part of it. I have no desire to tangle with these people again, as at this point it’s nothing but unnecessary drama. In fact I only write this post because people have been asking me about it, and it’s easier to send a link than type the same thing over and over again.

I did my “crime” and got caught for it, but in the end my heart is happy to know the average person had a chance to see what the hierarchy now admits trying to keep behind closed doors.

Originally from Queens, N.Y., and having grown up in Dayton, OH, Agostino Taumaturgo is a unique figure. He is the product of the unlikely combination of coming from a Traditional Roman Catholic background and a spirituality-friendly home. It was in this home that Agostino first learned the basics of meditation, prayer, and spiritual working. In time Agostino completed his theology studies and was ordained to the priesthood and was later consecrated a bishop. He has since left the Traditional movement and brings this knowledge to the “outside world” through his teaching and writing, discussing spiritual issues and practical matters through the lens of traditional Christian theology.
View all posts by Agostino →
This entry was posted in books, Rituals and Spells and tagged exorcism, new rite of exorcism, novus ordo church, vatican ii. Bookmark the permalink.