Why “Pagan” Is Not a Dirty Word

Reflecting on this for almost a decade, I’ve come to realize one of the problems with post-Vatican II Catholicism is a sort of Insistence on a Jewish identity.

I believe this is part of post-V2 Catholicism’s bigger effort to appease Protestantism (though many Protestant groups will never be appeased because their entire existence depends on Rome being somehow “wrong”). The attempt is wrong-headed and basically boils down to “We read the Tanakh, and that means we have an ‘identity’ too!”

The problem is that while Catholicism – along with Christianity in general – may have founded itself on a historical Jewish preacher and reads the Hebrew Scriptures, the fact is that Christianity’s connection to Judaism ends at the crossroads of the liberal wing of Pharaseism (the “House of Hillel”) and Noahide Monotheism. Even though Jesus founded Catholicism (Matt 16:18) within the context of a sub-sect of Judaism, both religions parted ways early on as attested both in the Book of Acts and other contemporary sources (Bar Serapion and Josephus among them). If we take the commonly-accepted dating of St. Paul’s earliest authentic epistle – 1 Thessalonians written circa 52 A.D. – the break between the religions could have been completed as early as 50 AD or as late as 70-80 AD when the Synoptic Gospels (Mark, Matthew, and Luke) started being written.

Objectively speaking, Catholicism parted from Judaism the moment it declared Jesus the Messiah. Or declared circumcision optional (Acts 19). Or declared no foods as forbidden (Acts 10). Or declared Jesus to be God (John 1:1). Or equated him with the Logos (also John 1:1 – Logos is the “rational principle of the universe” in Pagan philosophy). Or declared God to be triune (1 John 5:7). Or declared the existence of a place of eternal torment (entire NT, especially Apocalypse). Even the Tanakh both religions read in common, both religions interpret the text in radically different ways.

Judaism’s God is “achad” (Deut 6:4) not “yichud,” making the concept of a Trinitarian Deity un-Jewish to the point of abomination; those who offer up “Kabbalah” as a defense against this statement make the mistake of viewing the “Three Rings of Non-Manifestation” or the First Three Sefiros through the lens of Christian thinking. Yet the concept of a “Yichud and Achad” deity is so fundamental to historic Christianity that any sect who rejects it can no longer call itself truly Christian. In fact “Judaization” is the technical name for the heresy of denying Christian distinctives (Trinitarian Deity, Godhood of Jesus, Sunday Worship, Pork and Circumcision as optional, etc.) with the intent of making Christianity more like Judaism: Ebionites, Jehovah’s Witnesses, the “Hebrew Christian” movement, and others are all guilty of this charge.

Judaism’s Jesus is not Christianity’s Jesus, either. Judaism’s Jesus is a sorcerer and a blasphemer (Talmud, Sanhedrin 43a), and whose mother prostituted herself out to carpenters (Sanhedrin 106). Judaism’s Jesus is no Messiah, no God, and nothing more than one of many false claimants to the title running up to the present day, including Simon Bar Kokhba (d. 135 AD), Shabbatai Tzevi (d. 1676), and Rebbe Schneerson (d. 1994).

In fact I’d go so far as to say the term “Judaeo-Christian” is a pious fiction at worst, and at best the term can only apply to narrow swaths of common ground.

I believe Catholicism’s antidote to this is going back to what she did prior to Vatican II: own up to and be proud of her Pagan identity. Understand this clearly: I make no call to go back to saying “Orémus pro pérfidis judǽis” on Good Friday, nor do I call for any action beyond acknowledging legitimate differences and not trying to pretend they don’t exist. I call for no enmity but simply honesty.

Christianity is not Judaism. Judaism is not Christianity. My experience is that we’re perfectly capable of being friends without giving up either religion’s distinctives.

The original Protestants recognized this even if a number their descendants do not. When Protestants (i.e. anybody who’s not Catholic, Orthodox, or Gnostic) attempt to shame historic Christianity for being “Pagan” and try to cover themselves with a layer of “Jewishness” to justify it, they do themselves no favors; in fact I’ve had Jewish friends who point at them and laugh.

When Catholics feel ashamed of their cultural distinctives just because some Protestant is unconsciously channeling Middleton or Taylor (i.e. where “this Catholic practice matches this Pagan practice” comes from), they do a disservice to themselves and their children by hiding their Catholicism.

Of course, this does not mean that all Neopagan claims about “Pagan Catholicism” are true; in fact many such claims are false and grossly uninformed. Yet when a claim is true (the Mass of the Faithful having connections in Roman sacrificial rites for example), don’t wait for one of them to say it.

We are Gentiles. We are the descendants of Gentiles. We worship in a religion reasoned and debated by Gentiles over twenty centuries. Whatever Jewish content lies at the religion’s foundation relates largely to first-century theories of how a non-Jew could find salvation (i.e. Noahidism), and becomes dwarfed by distinctly un-Jewish claims of Jesus’ Messiahship and godhood coupled with claims that the Godhead is Trinitarian. 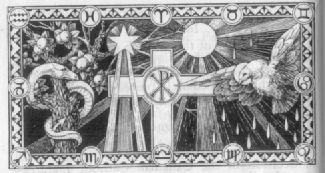 From the New Marian Missal, 1962 Edition.

Originally from Queens, N.Y., and having grown up in Dayton, OH, Agostino Taumaturgo is a unique figure. He is the product of the unlikely combination of coming from a Traditional Roman Catholic background and a spirituality-friendly home. It was in this home that Agostino first learned the basics of meditation, prayer, and spiritual working. In time Agostino completed his theology studies and was ordained to the priesthood and was later consecrated a bishop. He has since left the Traditional movement and brings this knowledge to the “outside world” through his teaching and writing, discussing spiritual issues and practical matters through the lens of traditional Christian theology.
View all posts by Agostino →
This entry was posted in Theology, Uncategorized and tagged catholicism, christianity, judaism, paganism. Bookmark the permalink.

3 Responses to Why “Pagan” Is Not a Dirty Word