The Pentagram and Christian Magicians 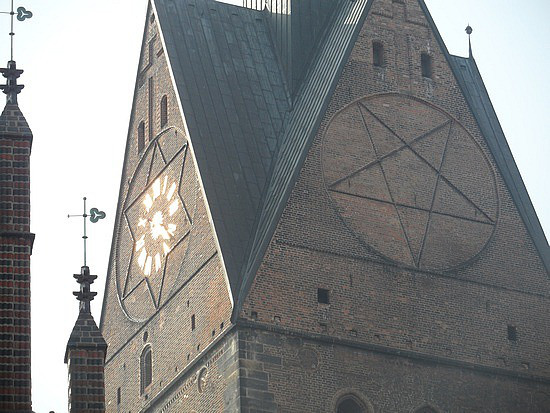 The following is taken from The Magic of Catholicism, pp. 209-214. For more information on the Pentagram and how it fits into Christian magical systems, please see this book and Ritual Magic for Conservative Christians.

“Unlike what some paranoid alarmists would have folks believe, the pentagram is not a diabolical device, but an abstract sign of the crucifixion.”[1]

The above quote gives a perfect summation of everything that could be said on the subject. In and of itself, before we consider it a symbol, we must consider the pentagram is first and foremost a geometric shape. Last time I checked, nobody owns the copyright on geometric shapes.

While nobody owns a copyright on geometric shapes, things can be said differently once the shape passes on to the realm of symbol, and the pentagram has been used as a symbol by many cultures, including Catholicism.

The first recorded appearance of the pentagram took place around the 30th century B.C., where it was used in Sumerian cuneiform as a character for the word ub, meaning “nook” or “corner.” One could say this was no more a symbol than Chinese characters are symbols in the usual sense, or one could say this was symbolic in the sense that all writing is symbolic of the sounds and words it represents. I leave the reader to his or her own conclusions.

The pentagram eventually passed to the Greeks, where during the 5th century B.C., the followers of Pythagoras considered the pentagram a sign of ὑγιεία, “health.” In fact it is the word ὑγιεία (ygeía) which gives us the English word “hygiene.”[2] We now come to the Christian era.

Just as the letters ὑγιεία were attributed to each point by the Pythagoreans (who still existed in the first centuries after Jesus’ time), so it was easy enough to do with the five letters of the word salus (the Latin translation of ὑγιεία).[3] It is from here that we must pass for about a thousand years in our quest to establish what the pentagram meant for Christians during those ten or so centuries.

By the medieval period, we find the pentagram as a feature of Church architecture, and in the late fourteenth-century poem Sir Gawain and the Green Knight we are told that Sir Gawain has the “pentangle” on his shield, and the writer feels prompted to explain:

“And why the pentangle pertains to that noble prince I mean to tell you, though it should delay me. It is a sign that Solomon set formerly as a token of truth, by its own right, for it is a figure that holds five points, and each line overlaps and locks in another and throughout it is endless; and the English call it everywhere, as I hear, the endless knot. Therefore it suits this knight and his clear arms, forever faithful in five things, and in each of them five ways.”[4]

In the next paragraph, Sir Gawain is described as having put all his faith in the five wounds of Christ. It is this – the Five Wounds – which the pentagram came to symbolize in the Middle Ages, while devotion to the Five Wounds was on the upswing, and in heraldry we find both the pentagram, and the five-petaled rose as a sort of stylized pentagram, also representing the Five Wounds.[5] As stated before, we likewise see pentagrams in church architecture, many which still stand at the present day. Here are some recent examples, all built during the nineteenth century:

Pentagram window at First Methodist Church in Warren, Indiana. This church was built in 1897 and used until 2013. 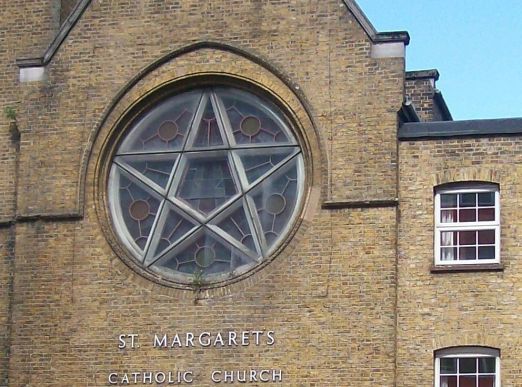 Sometimes “over-kill” is the best way to make a point, and I think we’ve done exactly that. Even without primary sources, the existence of the pentagram as a Christian symbol is well-attested since at least medieval times, meaning that there is nothing wrong with a Christian making use of it.

Even though other groups have claimed it as their own, especially Neopagans who (following Renaissance Christian magical writers) cite it as a symbol of the five elements – Air, Fire, Water, Earth, and Spirit – or Satanists who invert it thinking it a symbol of rebellion (the “inversion equals evil” idea was invented by Eliphas Levi in the 1850’s!), we have to remember that a geometric shape is nothing more than a geometric shape, and the symbols attached to it will come and go with the passage of time. Let others have their symbols and attachments to them, and realize they in no way prevent us from having ours.

One final word about the use of the Pentagram before we move on. It is linked with Jesus’ Blood, and has a long history of being used as a protective symbol. For us it is both a symbol of protection through Jesus’ Blood, and of the power to cleanse, protect, purify, and conquer that we received through that blood. So even if you don’t like traditional Gospel songs, you have to admit that old hymn is right: there is indeed “Power in the Blood.”

For more information on the Pentagram and how it fits into Christian magical systems, please see The Magic of Catholicism and Ritual Magic for Conservative Christians.

[1] Bilardi, Chris. The Red Church or the Art of Pennsylvania German Braucherei. 2009. Pendraig Publishing. Braucherei, also called “Pow Wow,” is a German-American system of Christian folk magic still practiced in parts of Pennsylvania. Bilardi’s book is the authoritative modern work on the subject.

[2] For a more detailed description of the pentagram of Pythagoras, see: http://web.eecs.utk.edu/~mclennan/BA/PP/index.html. (Retrieved December 2, 2014).

[3] Various websites and “dictionaries of symbols” claim the early Christians used the Pentagram as a symbol of health and the five senses, but I’ve yet to find a primary source documenting this.

[5] This is illustrated clearly in the poem As a Mydsomer Rose by John Lydgate (1370-1451), who compares the Five Wounds to a “Rose of the bloody field,” and to five wells releasing a red stream to Paradise, “Of whose five wounds print in your heart a rose.” The entire poem can be found online at: http://www.poetrynook.com/poem/mydsomer-rose. (Retrieved December 2, 2014).

Originally from Queens, N.Y., and having grown up in Dayton, OH, Agostino Taumaturgo is a unique figure. He is the product of the unlikely combination of coming from a Traditional Roman Catholic background and a spirituality-friendly home. It was in this home that Agostino first learned the basics of meditation, prayer, and spiritual working. In time Agostino completed his theology studies and was ordained to the priesthood and was later consecrated a bishop. He has since left the Traditional movement and brings this knowledge to the “outside world” through his teaching and writing, discussing spiritual issues and practical matters through the lens of traditional Christian theology.
View all posts by Agostino →
This entry was posted in Uncategorized and tagged architecture, buildings, christian, christian art, christianity, church, magic, magick, occult, pentagram, theurgy. Bookmark the permalink.

6 Responses to The Pentagram and Christian Magicians