Theurgic Affirmations for the Glorious Mysteries 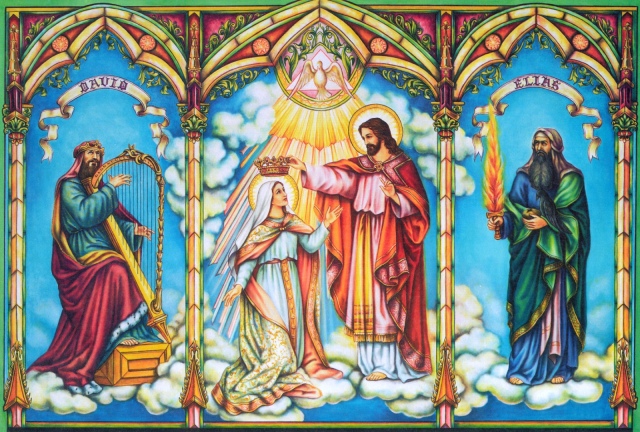 Friends, the last blog post of 2019 is upon us. And so is the last entry on the Theurgic Rosary.

Since we’ve covered much ground the posts discussing the Joyous Mysteries and the Sorrowful Mysteries, I’m just going to jump right into the affirmations!

“I am firm in faith, that I may overcome all obstacles on my way to victory.”

This Mystery has connection with the First Joyous and First Sorrowful Mysteries, as it is Mary’s faith that enabled her to say “yes” to God’s offer, and Jesus’ faith that enabled him to be “obedient unto death, even the death of the cross” in spite of having the power to escape and even subdue both Roman and Jewish authorities.

If anything, the faith we have is the faith that leads us to accomplish great things, “greater works than these” (John 14:12). The faith in God, in ourselves, and in our neighbor is what enables and empowers the love for them that I’ve elsewhere referred to as the First Three Keys to Effective Prayer.

If the history of this world has proven anything, it’s that the key to victory – physical or spiritual – begins with the victor having faith either in Deity, self, or fellow-workers.

“I keep my eyes fixed toward Heaven, that I may transcend the limitations of the physical plane.”

This Mystery is very much keyed into the Third Joyful and Second Sorrowful Mysteries, because these Mysteries are connected to the limitations of the physical plane and how to transcend them. Whereas the Nativity focuses on being indifferent to the world and its conditions (i.e. developing a kind of independence), and the Scourging focuses on gaining control over one’s physical urges (i.e. maintaining that independence), the Ascension takes that independence to a whole new level by teaching that if we want to be independent of the influences of one plane, we must learn to focus our life and energies on the plane above it.

This goes back to the discussion of “as above, so below” from our discussion of the Crowning with Thorns, except that instead of just focusing on our emotions here and getting them under control, we are now focusing on what is above this plane and entering it, thus gaining some actual transcendence over the laws and limitations of this one.

The Descent of the Holy Ghost

“I am filled with the gifts of the Holy Ghost, that I may manifest with wisdom, with love, and with power.”

The scene of this Mystery, the first Pentecost, shows us the completion of Jesus’ mission on earth, as He has gone back to whence He came and then sent the Holy Ghost – who proceedeth from the Father AND THE SON – who in turn fell upon the Blessed Mother and the Apostles and filled them with all grace and truth.

This is in some ways a higher analogue of the Third Sorrowful Mystery, as in the Crowning with Thorns we sought to control our thoughts and emotions, yet now the Descent of the Holy Ghost fills those thoughts and emotions and takes them in new directions so long as we let it happen.

These new directions can be inspiration, knowledge, new appreciation for those we know and love, or even for those we hate, and of course new ways to interact with and/or reach out to them. And this knowledge and love brings with it a kind of power, a power that is every bit as physical, intellectual, and emotional as it is divine or “magical.” To be filled with the Spirit of God is to manifest as the Spirit of God, or at least to the degree that such a “filling” has actually been accomplished. Hence the dual emphasis on the “Gifts of the Holy Ghost” and “Becoming a Soldier of Christ” in the Sacrament of Confirmation.

“I look toward a happy death, that I am unshackled from all limitations.”

This Mystery has obvious links to both the Fourth Joyous and Fourth Sorrowful Mysteries, as the gift of a happy death is the result of both obedience to Divine Law and final perseverance in one’s workings. Yet as the obedience can bring with it transcendence over the laws of Nature (i.e. command over the Sphere of the Elements), and perseverance in knowing and doing the right things can bring us successful results in our working, so ultimately our journey on Earth has to end sometime and we must face the Four Last Things: Death, Judgment, Heaven, and Hell.

Yet the end of our physical lives is not the end of our immortal soul’s journey. In fact that soul begins the next stage of its journey and while it may have to deal with the limitations of whatever plane in which it finds itself, it will no longer be shackled by this one.

What we do in this Mystery, then, is twofold. In the first place, we orient ourselves toward the fact that like Mary, we too will one day die. We also take that focus from the future to the present a little bit, because as the Christian’s path is to “die to the world” bit by bit each day, so each day we seek to unshackle ourselves a little bit more from whatever physical-plane limitations are holding us back from success in our workings on any level.

“I look to the crown that awaits me in heaven, that I may help others the way the Saints have helped me.”

When describing yesterday’s blog post, I said there are two Mysteries which encompass the other thirteen, and that the Crucifixion is one of them. The other one is the Coronation.

While the Crucifixion rings out simultaneously as the ultimate moment of victory and of defeat, the Coronation rings out solely as a moment of Joy. While the Crucifixion has tones of Modes 3 and 7 (Mars and Saturn, and also the increase of Choler and Melancholy, respectively), the Coronation is a pure, clear resonance in the 8th Mode (the Sphere of Fixed Stars and the reduction of Melancholy).

Yet it is in this end that we are told to look back to our beginnings. No matter who we are or what we’ve become in life, every last one of us was born naked, screaming, and alone. We became who we are because (hopefully) others helped us somewhere along the way, and now that we’ve achieved the Ultimate Victory and received the Crown that awaits us in heaven – in other words, once we have become Inner Plane Adepts in the truest sense of that phrase – it’s out turn to look to those to who are now where we were and to lend them a helping hand.

The fullest meaning of this Mystery is likely not knowable while we’re still living, as it’s focus is not on death but what happens after. Yet the theme is one we can begin to explore here on earth, with the saying “Each one, reach one and teach one.”

The series is now finished, and so is the year. There’s much more to discuss with these affirmations and reflections, and in fact this has only been a “starter guide” in order to whet your appetites for personal meditation and exploration. Yet as each Mystery of the Rosary has its associated virtue, so does each virtue have a positive effect for us should we meditate upon it and put it into practice.

With the New Year only a few hours away, I’m going to log off for now and wish you all a great 2020!

Originally from Queens, N.Y., and having grown up in Dayton, OH, Agostino Taumaturgo is a unique figure. He is the product of the unlikely combination of coming from a Traditional Roman Catholic background and a spirituality-friendly home. It was in this home that Agostino first learned the basics of meditation, prayer, and spiritual working. In time Agostino completed his theology studies and was ordained to the priesthood and was later consecrated a bishop. He has since left the Traditional movement and brings this knowledge to the “outside world” through his teaching and writing, discussing spiritual issues and practical matters through the lens of traditional Christian theology.
View all posts by Agostino →
This entry was posted in Magical Theory, Prayer and Devotion, Self Improvement and tagged affirmations, catholicism, devotion, glorious mysteries, prayer, rosary. Bookmark the permalink.