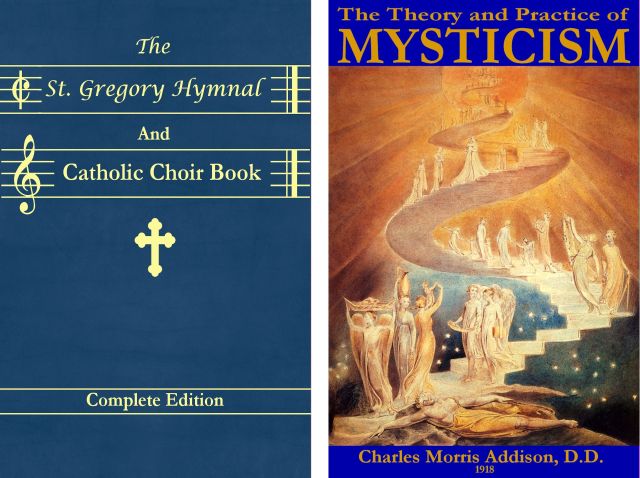 After a long while, I’ve begun uploading new additions to the free .pdf library. Here are the two most recent entries:

If you’ve ever been around a Latin Mass community – whether Traditionalist or Indultarian – you may have seen those tiny blue books with the red trim around the pages. That’s this book.

The only difference is that while the ubiquitous blue books are the “Melody Edition,” this one’s the “Complete Edition,” meaning it has harmony lines as well as melodies for singing. Only thing is I’m not sure this hymnal’s so “complete” seeing as the file abruptly halts toward the end of the Supplement. But on the bright side that happens during the Supplement, meaning you have the entirety of the actual Hymnal.

I’m a big advocate of Traditional Sacred Music, especially having come from the Traditional Movement where this is what you heard on a given Sunday. My hope is to add more musical material in the future, particularly along the lines of the “Rossini Propers,” the St. Basil Hymnal, and other Music Books actually used at the average parish Mass during the Pre-Vatican II era.

Also in the works, a blog post on how you can use “regular church hymns” in your magical operations, so stay tuned!

The Theory and Practice of Mysticism, (Charles Morris Addison, 1918)

This is something of a curious book, a collection of six lectures given by Rev. Morrison, an Episcopalian rector, to two seminary conferences in 1915. The style is very different from what you’ll find in Catholic textbooks on Mystical Theology (which tend to get technical), meaning this book’s likely more accessible for the newcomer looking for an easily-readable introduction to the subject.

While I don’t agree with everything Rev. Morrison says, that’s never a bar to inclusion in the library. What matters is that Morrison knows his sources and his material, and his lectures are ecumenical without being wishy-washy, meaning Protestant and Catholic alike can approach and benefit from his work.

Originally from Queens, N.Y., and having grown up in Dayton, OH, Agostino Taumaturgo is a unique figure. He is the product of the unlikely combination of coming from a Traditional Roman Catholic background and a spirituality-friendly home. It was in this home that Agostino first learned the basics of meditation, prayer, and spiritual working. In time Agostino completed his theology studies and was ordained to the priesthood and was later consecrated a bishop. He has since left the Traditional movement and brings this knowledge to the “outside world” through his teaching and writing, discussing spiritual issues and practical matters through the lens of traditional Christian theology.
View all posts by Agostino →
This entry was posted in books and tagged Free books, Hymnal, Mystical Theology, Mysticism. Bookmark the permalink.