Rosary for the People of Florida 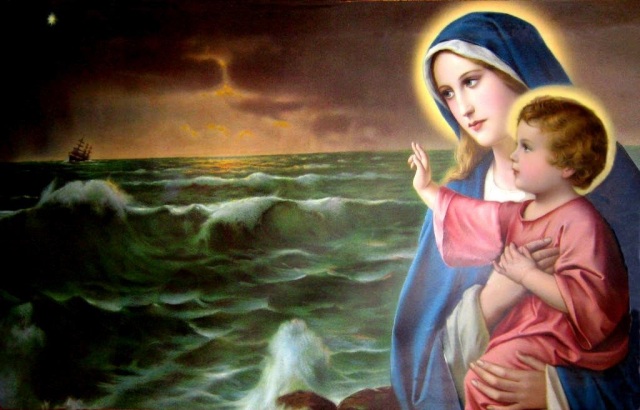 Hail, thou Star of Ocean, Portal of the Sky!

This came to me this morning during meditation. The storm is on its way, and people I care about are in the hurricane’s direct path. I’m posting this for the sake of anyone you know who may be in the direct path too.

Property damage is inevitable at this point, I wish it weren’t. The best objective is to save people and animals.

2. At the middle of each Hail Mary, add this after the name of Jesus:
“fruit of thy womb, Jesus … who protected the people of Florida from the hurricane.”

This is based on a method St. Loius de Montfort described in “The Secret of the Rosary,” and 19th century catechisms describe as the then-current method for praying the Rosary amongst Catholics in Germany.

4. While you pray, visualize the state as being inside a golden bubble while the storm passes over it. No matter what else happens in your mind, strongly visualize the people as safe and sound.

6. Finish the Rosary by saying the Collect against Storms from the pre-Vatican II Roman Missal:
“O Lord, drive away the spirit of evil from your household, and let the fury of the storm pass. Through Jesus Christ, your Son, our Lord, who lives and reigns with you in the unity of the Holy Spirit, one God, forever and ever. Amen.”

Pray for us, O Blessed Mother. That the People of Florida will be saved from the ravages of Irma!

Originally from Queens, N.Y., and having grown up in Dayton, OH, Agostino Taumaturgo is a unique figure. He is the product of the unlikely combination of coming from a Traditional Roman Catholic background and a spirituality-friendly home. It was in this home that Agostino first learned the basics of meditation, prayer, and spiritual working. In time Agostino completed his theology studies and was ordained to the priesthood and was later consecrated a bishop. He has since left the Traditional movement and brings this knowledge to the “outside world” through his teaching and writing, discussing spiritual issues and practical matters through the lens of traditional Christian theology.
View all posts by Agostino →
This entry was posted in Uncategorized and tagged florida, hurricane irma, prayer, protection, rosary. Bookmark the permalink.