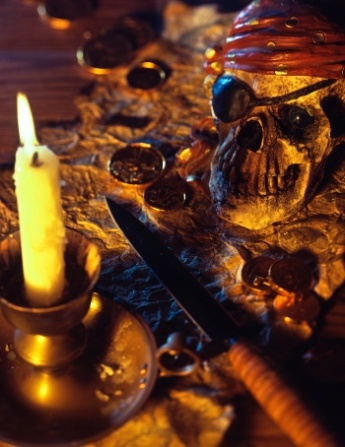 Just as the idea of Christian Magic is not new, neither is the idea of cursing magic by Christian Magicians. Much like their Pagan ancestors, Christian magicians would traffic with the daemones for good or for ill, various folk-saints would become patrons of black magic or curse-work, the Grimoires (written by Christian hands) would contain procedures for cursing your enemies.

The Mass
Not to be outdone by “mere laypeople,” the Spanish Church in 694 found it necessary to forbid priests from saying Funeral Masses for living people as a sort of death-curse. The Seventeenth Council of Toledo tells us in its Fifth Canon:

“Some priests hold Masses for the dead, on behalf of the living, that these may soon die. The priest who does this, and the person who induced him to do it, shall both be deposed and forever anathematised and excommunicated. Only on their deathbed may the communion be again administered to them.”

Likewise there’s a place in the Traditional Latin Mass – the Commemoration of the Deceased beginning with the words Memento etiam, Domine – where the priest could just as easily insert the name of a living person into any Mass. It doesn’t help that these names are said mentally, meaning any priest saying a Latin Mass can sneak in his secret intentions and the congregation would be none the wiser. Coupled with the Commemoration for the Living (the prayer Memento, Domine, famulorum famularumque tuarum) where the names are also said mentally, the Mass as-written packs a great deal of magical flexibility.

The Grimoire of Honorius prescribes the Mass as a key element in its magical ceremonies, and in the 17th century we meet with a defrocked priest named Étienne Guiborg functioning as part of a Magical Mass ring in Paris. As far as I understand the matter, the original Satanist “Black Mass” of Anton LaVey – Introibo ad Altare Satanas – was derived largely from the Traditional Latin Mass and shares elements with the descriptions of Guiborg’s ceremonies.

Folk Practice
Finally, we have more-or-less Christian (or Christianized) folk systems retaining pre-Christian elements, where the practitioner may be a baptized and believing Christian whose ancestors simply kept the old practices, maybe gave them new explanations (or didn’t bother with explanations at all) and passed them down from generation to generation.

An example of this would be the Italian Stregoneria practice of using lemons to cast curses. There’s variance in method, and though Leland’s Aradia and other authors describe stabbing the lemon with pins, every born-and-raised practitioner I’ve ever known has told me they use iron nails. Folk practices tend to be fluid and diverse enough that some may use pins while others use nails, and I’m content to leave the reader to their own researches should they feel so inclined.

Morality
I’ll waste neither your time or mine on apologetic: Christian morality condemns cursing work in the strongest terms, and the condemnation is airtight from the standpoint of moral theology. The Fifth Commandment includes anything that can bring death to someone, magical or not; Moral Theology textbooks expand the Fifth Commandment’s meaning to any kind of violence brought on without provocation (i.e. self-defense is justified). In my own books, I’ve gone so far as to say baneful magic is an abuse of God’s gift of Actual Grace, and I stand by it.

That said, I stand on a fence while writing this article. On the one hand I won’t encourage anybody to use baneful magic against others, while on the other I recognize there are situations where it may be necessary for survival. In this case we can look to two things: 1) we admit what we’re doing and accept responsibility for it, and 2) be thankful there’s nothing Extreme Unction can’t fix.

As in all things magical, do so not as a child asking for permission but as an adult acting out of self-determination and self-responsibility.

Example
In this part I present an example of what a theologically-orthodox Christian curse would look like; I emphasize that this is given as an example for study rather than to be taken up and used in practice. Theologically-orthodox to a Traditional Catholic anyway, as Protestants and Vatican II-babies may have problems with the references to Purgatory and Limbo. It likewise shows an example of the fact one can be mortally sinful while at the same time steeped in perfect orthodoxy. In fact it’s not a hard thing to do.

Without further ado, here’s the ritual!

Though based on traditional cursing ceremonies, the following ritual has no particular tradition behind it, save for the incorporation of traditional elements.

The operator will need a lemon and four iron nails, which will be inserted into the lemon at specified points in the ritual. If Missa Requiem Aeternam is to be said, this ritual may be inserted after the Dies Irae, after the Gospel, or after the Consecration (between the Haec Quotiescumque and the Unde et Memores).

The intended victim’s name is symbolized by “N.” in the ritual text below.

Before the Mass, or before the beginning of the ritual (if there is no Mass), the Operator lights a black candle and/or a candle of pomegranate scent.

Placing the lemon in front of him in the center of the altar (if there be a Mass, the lemon must be outside the Corporal), the Operator shall extend his hands while he begins the invocation:
I call upon the Spirits of the Ancestors of the (operator’s last name) line.
I call upon all the Poor Souls suffering in Purgatory.
I call upon all the damned condemned to live in Hell, cursed among the acrid flames.
I call upon the unbaptized babes sentenced to dwell in Limbo; open now your sleeping eyes and come unto mine aid!
The Operator joins his hands:
For justice’s sake come unto me.
Heed my call and heed my will.
Because this creature, N., (holding hands over lemon “Hanc Igitur” style)
Hath done much wrong but liveth still.

Ancestors, look upon the soul and the needs of this your child who has been wronged.
Spirits and demons in Hell, rejoice that the soul of N. shall join your number, and soon you shall have another peon to torment.
Poor Souls in Purgatory, impart to N. the greater portion of your suffering, that for a moment you shall enjoy some respite and some repose.

Operator picks up the lemon and stabs it with one of the nails while beginning the following oration:
Ye unbaptized babes who dwell in Limbo, children of abortions and victims of the sleeping death, whose cries no one has ever heard and names few people have ever known, make your cries resound in the ears of N., that your name and your voices shall be known to him/her at all times. Whether he/she be sleeping or waking, in coitus or at the market, with his/her family or involved in some nefarious activity, his/her ears shall know no rest, his/her mind shall know no comfort; for within him/her, without him/her, and about him/her shall always be the noise of your cries and wailings, louder at all times than even his/her own thoughts, louder at all times than even the words of whosoever may try to speak with him/her.

If this is done after the Words of Consecration, the Operator may separate his thumb and forefinger to hold both the lemon and the nails, since this encourages transference of energy as per the Law of Contagion.

Operator takes another nail and stabs the lemon, saying:
Demons, Spirits, and Damned in Hell: again I call to you. I call you all to reach out from the depths and touch the heart of N. Touch his/her heart with your putrid fingers, envelop it with your fiery hands, and yank it from his/her failing body. Bring unto him/her the physical death he/she richly deserves, and spiritual death amongst the ranks of those you torture. Cease not to torment him/her in this life or the next, to bring him/her to physical death quickly, and make him/her your punching bag when he/she finally arrives in the Lake of Fire.

Taking yet another nail and stabbing the lemon:
Spirits of the Ancestors of the (operator’s last name) clan: avenge me your child (operator’s first name) who carries your blood within my veins. Plead not for N.’s case before the judgment-seat of the Father, but stand ye at his/her left hand, pointing out the reasons he/she must be cast down to the Lake of Fire reserved for the Devil and his angels. Forgive also the failure of me your descendant, for my show of weakness has led to the necessity of this malediction, and help me grow in strength to become a credit to your name.

Taking up the final nail, the Operator stabs the lemon while saying:
Thus do I have revenge against N.!
Thus do I move the powers above and the powers below!
Thus do I move the mountains by the Mystery of Faith,
By the mustard-seed multiplied forevermore!
As fixed as the firmament, as constant as the Northern Star,
Thus do I manifest my will.
For N. has found pain, torture, disease, insanity, and finally death in this life:
Only to be cast into more cruel and unusual torments in the next.
Nunc et in saecula!
Amen.

The ritual is now finished, and the lemon is placed at the left side of the Corporal, if there be a Mass. After the Mass is finished in the usual way (or if there be no Mass), the lemon is removed from the altar and kept in a safe place where there Operator will project negative intention into it on an as-needed or “as convenient” basis.

Originally from Queens, N.Y., and having grown up in Dayton, OH, Agostino Taumaturgo is a unique figure. He is the product of the unlikely combination of coming from a Traditional Roman Catholic background and a spirituality-friendly home. It was in this home that Agostino first learned the basics of meditation, prayer, and spiritual working. In time Agostino completed his theology studies and was ordained to the priesthood and was later consecrated a bishop. He has since left the Traditional movement and brings this knowledge to the “outside world” through his teaching and writing, discussing spiritual issues and practical matters through the lens of traditional Christian theology.
View all posts by Agostino →
This entry was posted in Magical Theory, Rituals and Spells, Theology and tagged black magic, christian, curse, hex, magic, morality, occult, religion, spell, spirituality. Bookmark the permalink.

7 Responses to Magical Curses in Christianity?